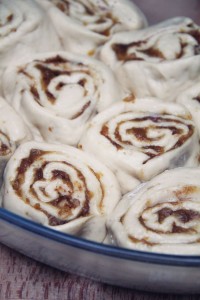 Pour water and milk into a bowl and heat it in the microwave (it should be warm, not hot).

Add sugar and yeast and mix. Let sit for 10 minutes.

In a large bowl, mix flour and salt and make a well in the centre. Pour the yeast mixture and the coconut oil into it and combine everything with your hands.

Knead the dough for 5 minutes and let it rise for 3 hours in an oiled bowl covered with a humid towel.

Now, prepare the filling. Blend the dates, water, cinnamon, and pecans until the mixture has a consistency like a caramel sauce.

Roll out the dough into a rectangle on a floured surface. Spread the filling evenly on it and roll the dough carefully (as if you were making makis).

Cut into rolls and place them into a greased baking tray. They shouldn’t touch each other.

Cover them with a humid towel and let them rise again for 2 hours.

Preheat the oven to 175° C and bake for 25-30 min. Once the cinnamon rolls are slightly golden, they’re ready.

For a yummy touch, you can sprinkle some coconut sugar and chopped pecans on top of your rolls once they’re cool.

Your cart
0
Your cart is currently empty.

Stay up to date